5 unexploited drivers of change in your organisation

The reality of change is messy. Businesses assume that the scale of a change initiative should match the scale of the crisis. So, huge, win-or-lose bets are taken, the whole organisation is shunted on the back of a big prediction and, as reality and planning fail to match up, change is more often a failure. Some analysts say that 50-70% of change initiatives don’t work.

Columbia University's Rita McGrath and Ryan McManus get to the heart of the issue in HBR when they argue for an incremental change process - even in the face of massive crisis. They found that, by “continually finding ways to fix problems with digital technology, testing and refining assumptions about what works, getting new information, and minimizing risks, [businesses] can learn their way gradually toward an effective digital response.”

Most businesses still subscribe to the big problem = big initiative methodology. Consequently, the tools they believe they have at their disposal - endless budgets and proliferating middle-men - aren’t actually the most effective ones. As an antidote, here are 5 areas business can mine to put the odds of change in their favour.

While change is certain, its direction is not. So, the best way to transform in time is through constant micro-corrections that are consistently measured. In the same way that the pituitary gland keeps human homeostasis in check by monitoring and responding to tiny imbalances before they spiral out of control, most systems are best maintained by lots of small corrections rather than one big one.

The same is true for transformations. A report into public sector bodies found that the ones that kept up consistent reporting on sustainability practices became more sustainable far faster. Similarly, McGrath and McManus tell the story of a steel producer called Klöckner’s digital transformation. The business was successful because their change was built off a load of micro-corrections.

The first two years of digital transformation was entirely process smoothing - creating an online shop, a contract portal, order transparency tools, and a parts-manager app. This change was successful because it was constantly measured. Not every addition was successful. But, by waiting to see how each small change worked, keeping the successes and learning from the errors, Klöckner was able to avoid relying on chance in a way that huge, singular transformations can’t.

So next time you’re involved in a big change process or strategy update (i.e. all of the time), ask yourself and others: are the micro-feedback loops in place to support this new direction?

2. A strong brand for learning comms

With change, it’s clear that comms are key. Indeed, this OECD study found that “branding, a process of linking organisational identity and the external image of a given organisation, can enhance institutional development and stimulate organisational change.”

But, while organisations are often good at internally branding change, they’re rarely as successful at branding the main agent of that change: skills development. The platforms, content and programmes that support the change are bought in from different places with only a veneer of branding on top. When the change seems home-baked and valid but the learning materials to support it seem alien or generic, the change initiative fails to break through.

Take one big consumer goods client. We originally sent our platform’s onboarding email from filtered.com. The open rate was about 40% - not bad, certainly, but not what we wanted. We then sent the next email from the client’s domain. The open rate rose to 85%.

By branding the learning as a part of the big change, and a part of the company, you can explicitly link learning and transformation. This improves engagement and, therefore, success rates.

It’s almost a cliché now to point out that change is as much about talent as technology. But, talent shouldn’t just be defined in terms of current capabilities, it should be understood more in terms of potential. ManpowerGroup’s Becky Frankiewicz and Tomas Chamorro-Premuzic put it best when they argued: “since nobody knows what the key future hard skills will be, the best action is to bet on the people who are most likely to develop them.”

Filtered CEO Marc Zao-Sanders made a similar argument in HBR when he argued that the most important question to ask new hires is ‘how do you learn?’ With as much as 50% of the variability in group or unit performance being attributable to the individual leader, it’s essential to pour resources and trust in people who are able to continuously improve.

Fast, committed learners who can translate new knowledge and skills into performance are a necessary condition of a change strategy working because no plan survives contact with the enemy. If you want to learn your way to a transformation, you better have good learners.

McKinsey senior partner Bill Schaninger, when asked about involving thousands of employees in a single transformation venture, argued: “we’re still saying we want an overarching plan. But what we’re saying is set the menu and allow people to choose from the menu.”

This makes even more sense in the context of incremental change. Rather than forcing through one big change, organisations can be more delicate if they personalise change at every level. You may have thousands of people who need to switch or adapt their roles, for example. Decision tree-style tools that allow employees to frame the role change in terms of their own goals and motivations, and ideally permit the freedom to decide what new or different role to take, enable you to take a big change down a granular level.

It also makes it easier to keep this change agile with feedback loops. If you’ve invested huge resources and time into one single initiative and it flops, changing it will incur huge losses. But, if one person’s specific role isn’t doesn’t quite work, tweaking it’s not such an investment. And, because each role is so specific, it’s likely to be far more accurate.

Skills are the means through which change is enacted: the ability for people to do new things. Skills are nearly always the missing ingredient in technology adoption: if your managers are dramatically less effective when communicating via video calls than face to face, for example, then don’t expect the productivity gains of less travel time to be realised. Most technology only changes the real world insofar as it changes human behaviour around it, and that puts the right skills front and centre for digital adoption.

While you might not see skills themselves as “unexploited”, in most organisations, they’re definitely squandered. The problem is getting the right skills to the right person. A meta-study found that “insufficient education and training” was the most commonly mentioned reason that a change initiative failed. This is never because there’s not enough training content. Rather, it’s because the learning doesn’t hit the mark.

One example of this is when an organisation prioritises a particular skill and then trains a very large population with the same content. There’s nothing less ‘agile’ than bringing consultants to train your entire white-collar workforce on the new agile working practices. You can guarantee that some of the audience know it already and others will need different, supplementary skills to support the change. So most of the audience goes away empty handed.

If there’s one fundamental to get right to drive change, it’s really understanding (analysing, prioritising, nuancing, specifying) what skills your people need, and who needs what. To get a better idea of how Filtered uses Content Intelligence technology to get to the heart of skills, explore our free version of the platform. 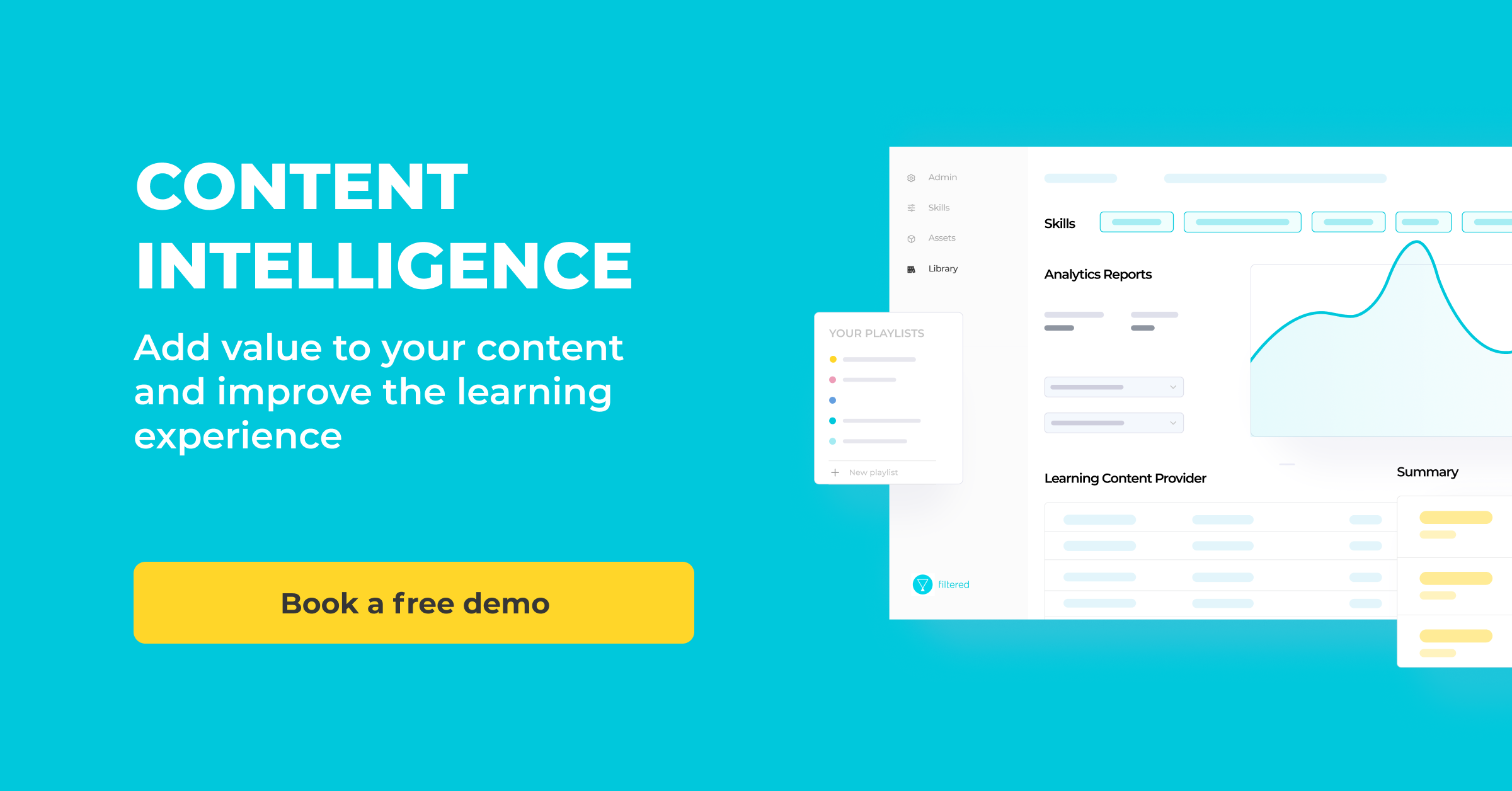