"a class of social system problems which are ill-formulated, where the information is confusing, where there are many clients and decision makers with conflicting values, and where the ramifications in the whole system are thoroughly confusing” (Churchman, 1967).

I expect this sounds as familiar to you as it does to me. Two things come to mind immediately. First, we’re working on an issue which is essentially impossible. We can choose whether to find that uplifting or demoralising. But it’s no wonder that many of the issues (such as ROI) in learning remain permanently unresolved. The problem’s wickedness does not mean that progress has not been made or cannot be made. It does mean that the idea of complete progress (a full solution) is nonsensical. Second, since design thinking is entirely concerned with solving wicked problems, can we apply some of it to learning? Maybe...

Design thinking is as cool as it sounds. It’s what one of the world’s most influential innovators, Ideo, is based on. It’s even trendier than ‘Learning Management System’: 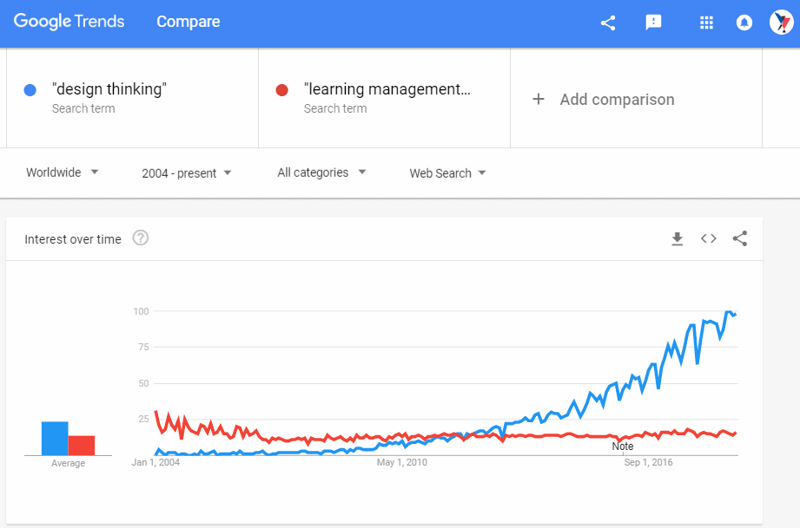 I think it’s interesting, provocative and potentially useful to apply a business methodology as hot as design thinking in a quieter (though indispensable) domain, such as Learning & Development. But design thinking, like the problems it’s intended to help tame (note, not solve!), is tricky to pin down.

Well, one characteristic of the method is the reframing of problems. By taking a step back and moving to an unorthodox angle, one might catch the problem in a helpfully different light. Maybe it becomes a different problem. Maybe it’s not even a problem at all. Learning is quite often reframed as a problem of performance. After all, who cares, if people are learning or not if they’re performing well? You can then make an argument to reframe performance as capability. And this can be further reframed to productivity. And perhaps again to profitability. But I’d stop at productivity because productivity at big companies is a lot to do with Microsoft and that‘s the kind of unorthodox angle I’m after. Note that Microsoft’s ‘mission and values are to help people and businesses throughout the world realize their full potential’. We can get to Microsoft with design thinking another way too…

Another characteristic of design thinking is the importance of observations. Pay attention to what’s happening and let any inferences flow from that towards a plausible, useful - if still uncertain - conclusion. As Nicholas Taleb (author of The Black Swan) tweeted last week:

“1- Ignore surveys. People think they prefer restaurants 1) quiet so they can talk, 2) roomy, 3) no line. Yet they flock to 1) loud, 2) cramped restaurants 3) w/50 min wait. Never ask people what they want, watch what they do. Revelation of preferences.”

What if we watch what people do and where they do it?

Well, one observation one might make at many big companies is that Microsoft is everywhere. There are 1bn users of Microsoft programmes globally. 83% of enterprises use Microsoft. Microsoft, uniquely, has multiple software packages that are practically household names in their own right: Excel, Word, PowerPoint, (productivity) Outlook, Skype, Teams, Yammer (comms). Almost all knowledge workers on the planet are on LinkedIn, a Microsoft company. Microsoft has had a long time to embed and entrench themselves at big companies. Google Drive, Google Docs, Dropbox, Slack, Atlassian, etc are making some inroads, but enterprise-wide deployments of productivity software that is anything but Microsoft is still a rarity.

Of course, claiming that Microsoft is a big deal is hardly going out on a limb. But does your learning stack and strategy reflect that appropriately, commensurately, effectively? If not, what might you do about that? Here are a few ideas.

Obviously, you make MS training available to your entire staff already. But how proficient are they with this software they use day in day out? Probably 20% are fine but 80% could do with at least some help. Which 80%? This more technical know-how is actually pretty quantifiable too. How many of these top 100 Excel functions and features do your staff know? How many and which should marketing / finance / sales / HR / frontline staff know? It is not very hard to set some reasonable benchmarks and run a skills audit. But virtually zero big companies have.

There are many good libraries. Ours is just one.

Technical (hard) skills are often glibly set against so-called soft skills. This is terrible. They should be more often considered together by learners, and taught together by trainers.

Yet most learning assets (even face-to-face classes) tend to be about technical skills or soft skills. Shame. What’s the best we can do with this disassociated content? Well, content-clustering algorithms can help. Appropriately-conceived-and-tuned algorithms can spot patterns between assets beyond obvious meta-data to place, say, this outstanding essay on clear writing and clear thinking alongside a how-to video about nested bullet points. And if there is some explanation of the connection between the two assets, the user is even better served.

Imagine bringing the hard and soft sides of your content libraries to life by intelligently bringing them together. When are modern workers not writing, communicating, analysing or presenting using some Microsoft software? These are the very biggest ticket items in L&D.

Microsoft gives rise to multiple popular destinations for your workforce. Depending on what you’ve enabled and advertised, any of Teams, Outlook, Yammer, SharePoint or LinkedIn could be *places* that most of your workforce visit daily. That matters because it contrasts so starkly with the traffic generated by learning systems (in general). Is there a way to jump on the Microsoft bandwagon and turn a few more heads towards learning? Think of these places as advertising space for which there’s no charge, your objective (encouraging learning) is worthy, and the audience is large. Here are some specific ideas.

Outlook. Can you get some meaningfully personalized emails into the inboxes of your staff. Our research says weekly is not overly intrusive, if they’re good.

Teams. Can you run a simple integration to just place your learning on Teams? Here’s the screenshot Josh Bersin featured a couple of weeks ago of magpie-on-Teams: 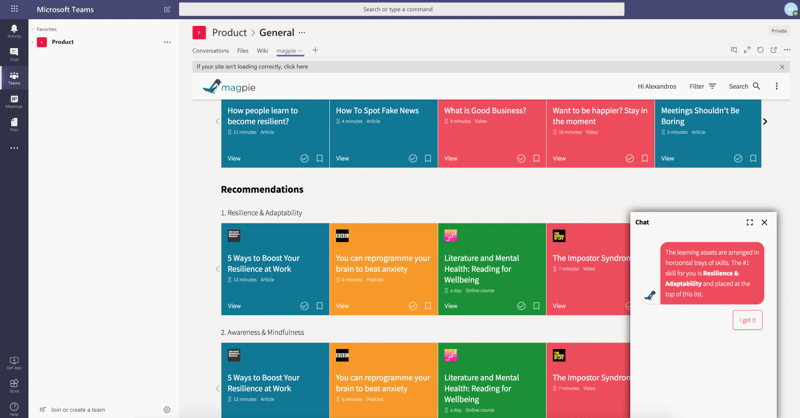 There are deeper, more intelligent ways to integrate 3rd party systems with Teams too. If this is appealing to you, please be in touch with me (marc@filtered.com) - we’re looking for big companies to trial some of our lab work.

Yammer. Yammer is a messaging and content-sharing service like Teams but less formal in look and feel. Generally, in terms of formality email > Teams > Yammer but this is for you to decide and offer some guidance on at your company. There are lots of possibilities here, including, for example, having a Yammer feed for Teams, and have the more informal bleed naturally into the slightly more formal.

SharePoint. If SharePoint gets a lot of traffic at your company, try to siphon some of it off for learning. Can you get an enticing looking ad for learning onto the main SharePoint landing page for all / a large number of users? If not, what’s blocking this? CEOs are increasingly feeling the pressure and considering the reasons to evolve into a learning organisation. If you’re having difficulty with this, talk to us. We’ve fought this kind of battle a few times, and sometimes we’ve won.

Of course, many of these won’t be useful to most people at your company. And these are more about APIs and seamless connectivity between multiple data sources rather than being spaces for learning to pitch up. Still, given the likely pervasiveness of Microsoft at your firm, it’s worth developing an awareness of these applications to see if and how they can make learning better or just more prominent.